Due to nationwide shipping delays, please allow extra time for your order
Retail locations
All

You’ve probably heard of menopause. It’s the final menstrual period in a woman’s life and is typically confirmed when a woman hasn’t had a period for 12 consecutive months. Usually, this stage in life happens between the ages of 40 and 58, with the average age being 51 years old.

But before any of that happens, women go through something else: perimenopause. If you haven’t heard of this before, it’s not incredibly surprising, as most people tend to focus on menopause and all of its dreaded side effects.

However, perimenopause, and specifically, perimenopause symptoms, are just as challenging to manage. Luckily, there are solutions that can help alleviate the uncomfortable side effects, but if you’re looking for therapeutic treatments that are non-toxic, you need to consider natural remedies.

Not only are they great at soothing perimenopause symptoms, but they’re also healthy options that come with little to no side effects. But before this article reveals what those natural remedies are, it’s crucial to have a basic understanding of the condition you’re trying to manage.

First thing’s first. Sometimes, people use perimenopause and premenopause interchangeably, but these two conditions are pretty different. Premenopause means you’re not showing any symptoms of perimenopause or menopause.

It’s only after you start detecting significant changes in your body that you may be entering perimenopause. Hormonal imbalances will likely pop, usually eight to ten years before you go through menopause.

During this time, your estrogen levels will drop. But over a 28-day period, they might increase and decrease more sporadically than usual, leading to irregular menstrual cycles and other symptoms.

However, the final stages of perimenopause won’t typically include this up and down pattern. Your body will create less and less estrogen. But the significant drop won’t eliminate the chances of getting pregnant. You could still have children during perimenopause, which could last as long as four years or as little as a few months.

Once it ends, though, you’ll officially enter menopause. At this stage of life, your ovaries will produce such low estrogen levels that it’ll be nearly impossible to release eggs. This change will also make your period stop.

What are the common perimenopause symptoms?

During the perimenopausal phase, you’re going to notice some symptoms. And most of those symptoms will be different than the ones you experience during menopause.

As your estrogen levels continue to drop, you’ll slowly start to notice symptoms of menopause. Those symptoms include the following:

While these two stages in life usually carry different side effects, they do have one big thing in common. Perimenopause and menopause may boost cholesterol levels, which is why women in postmenopause have a higher risk of developing heart disease.

Even though there are many symptoms of perimenopause, that doesn’t mean you can’t take steps to relieve the discomfort. With the right natural remedies, you can alleviate the common side effects of perimenopause.

In fact, there are four natural remedies that reduce this condition’s symptoms, and all of them are available in Kat’s Naturals’ CBD Oil called Balance.

Hemp cannabinoids are becoming increasingly popular as studies indicate their many therapeutic benefits. Currently, more than 85 of these naturally-occurring compounds exist, and it’s believed that these cannabinoids work better when together.

Combined, they have the power to unleash the entourage effect, which means the cannabinoids boost each other’s soothing benefits. This information is why Kat’s Naturals’ Balance includes several hemp cannabinoids such as CBD, CBG, CBC, CBGA, CBDV, THC, and THCa. 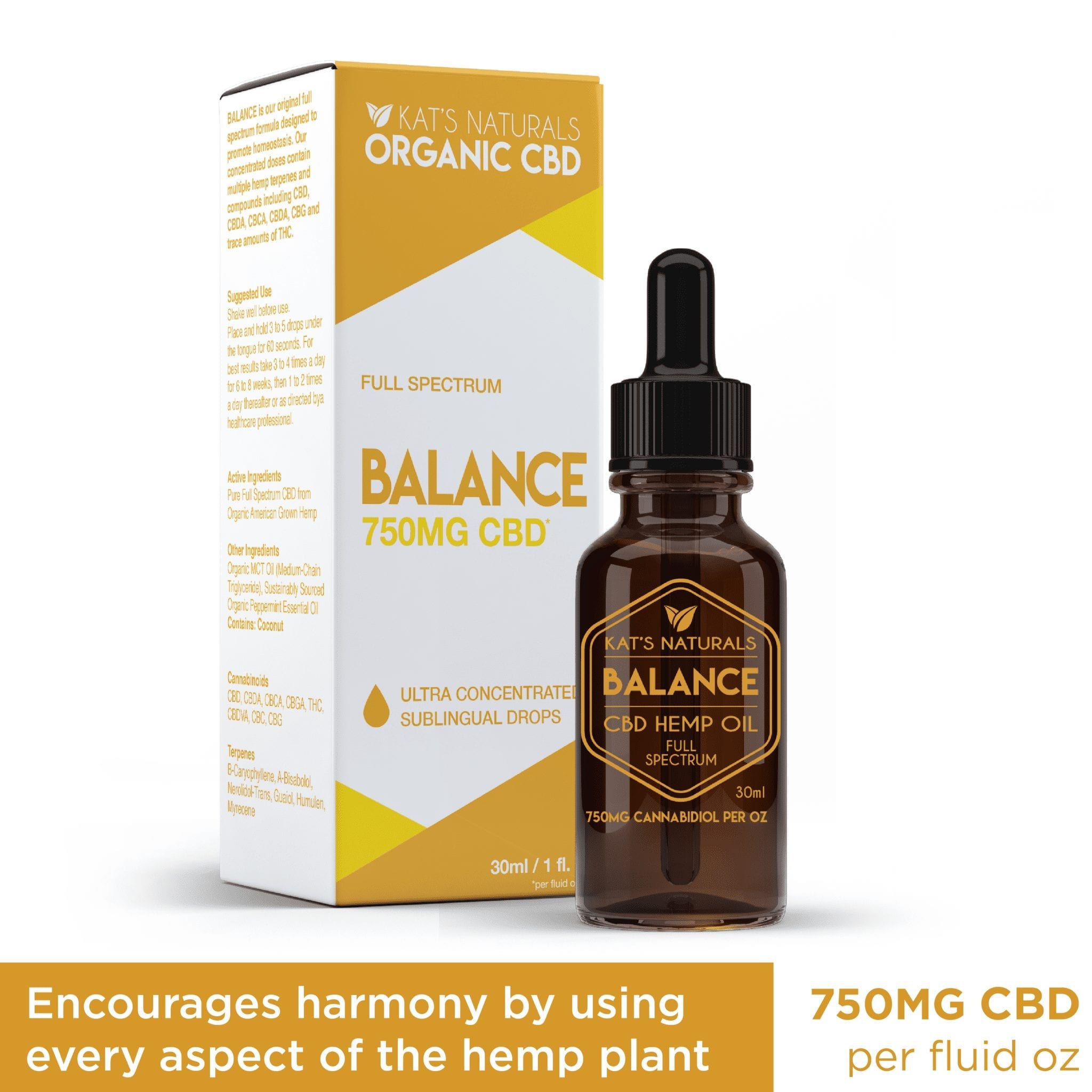 These compounds boost CBD’s effects. On its own, CBD is excellent at reducing inflammation, mood swings, and poor sleep. All of these problems are PMS symptoms, which are ultimately symptoms of perimenopause. So, having CBD and all the other cannabinoids that enhance CBD’s therapeutic benefits may be helpful.

Healthy saturated fats are great additions to your diet, and coconut oil is full of them. These fats offer different effects than the typical ones in your health and wellness regimen. For example, they boost fat burning, a significant benefit if weight gain is one of the perimenopause symptoms you’re noticing.

Botanical terpenes is simply a term that references the hundreds of terpenes that come from legal plant sources. These compounds offer a unique fragrance and flavor to natural products, but they also come with many benefits for your health.

For instance, beta-caryophyllene might reduce pain, which could be incredibly beneficial if you’re experiencing breast tenderness, headaches, or muscles aches because of perimenopause. Additionally, a-bisabolol has pain-relieving, antimicrobial, antioxidant, and anti-inflammatory properties, making it a powerful natural remedy.

You may have heard that peppermint essential oil is great at encouraging healthy respiratory function and clear breathing. But did you know that this natural remedy may also be wonderful at alleviating cramps and enhancing digestive health?

Managing perimenopause symptoms isn’t easy, but it’s possible with the right solutions. Natural remedies like Kat’s Naturals’ Balance includes all of the organic and vegan ingredients you need to soothe the side effects of perimenopause.

And the best part is that using Balance is easy. This CBD oil will be a simple addition to your health and wellness routine. All you have to do is buy a bottle and put a few drops in your mouth or favorite drink.

Get your hands on a bottle of Kat’s Naturals Balance to start relieving your perimenopause symptoms!