Free shipping on all US retail orders
Retail locations
CBD 101

13 Top Hemp Strains and How New Ones Are Created

13 Top Hemp Strains and How New Ones Are Created

Most people with a passing interest in hemp know it has many strains. But unfortunately, the CBD industry rarely discusses the different hemp strains.

For those who are interested in learning about hemp strains, the definition is quite simple. Hemp strains are defined by their components and the chemical composition of the plant they come from. These components, which are a mix of terpenes and cannabinoids, determine the effect that a particular strain of hemp will produce. Any variances in these components will cause different hemp strains to yield different results.

Knowing that information makes it’s crucial for consumers to understand the chemical composition of a hemp strain. But how do they do that? The answer lies in the profile of the hemp flower, not the name.

It’s a common misconception that consumers can sufficiently inform themselves about cannabis by recognizing the names of certain strains. The cannabis industry perpetuates this misconception by explaining the erroneous perceptions around indica and sativa strains. However, in both cases, the names “indica” and “sativa” only indicate the shape of the plant’s leaves. They offer no insight into the strain’s components, and therefore, specific effects.

Whenever consumers purchase an indica, it’s not a guarantee that they will relax. If the indica’s chemical composition doesn’t carry the terpenes that boost relaxation, individuals will not experience any increased relaxation.

The same goes for a sativa. Buying one doesn’t guarantee a consumer will experience more energy. If the sativa strain doesn’t have the necessary components to achieve that effect, the consumer will not increase their energy.

This fact explains why people still have inconsistent experiences with sativas and indicas. Consumers hear these names and expect to feel one thing and end up feeling another. As a result, industry experts have criticized the commercial use of these labels. Instead, they emphasize a need to learn the specific effects of different plants’ compositions instead of generalizing their results.

The principle is the same for hemp strains. Their components and chemical composition are the factors that consumers should consider, and thus what should matter to anybody developing a new strain. But creating a hemp strain with a precise genetic make-up is a complex process.

How are hemp strains created?

In simple terms, growers can create a new hemp strain by identifying plants with properties they wish to mimic and combining them. Of course, the reality is far more complicated.

Adding cannabinoids requires growers to obtain the isolates of each one and add them in the specific ratios that consumers desire. This process is complex and far more expensive than getting a cannabinoid mix directly from the plant.

In addition, growers also have to determine the effects they want a new strain to produce. There is a long list of therapeutic benefits that growers associate with different hemp strains, ranging from pain relief to aiding weight loss. So, growers have to get specific about what they want a new strain to achieve and identify existing strains whose combined profiles can deliver those effects. Afterward, it’s a matter of cross-pollinating the plants to produce the new hemp strain.

This technique is relatively new in the CBD industry because the focus is often on extracting the CBD isolate. But more cultivators are following a similar path that their counterparts in the marijuana sector pursued.

When it comes to marijuana, the compositions of plants — and their resultant effects — are given much greater consideration. But this was not the case when marijuana enthusiasts established the industry. Current trends suggest the CBD industry will have a similar journey.

The importance of homogenization

While some CBD growers are innovating how they develop hemp strains, altering and controlling the chemical composition of a crop is extremely difficult. Environmental conditions mean growers might have many variations of the same hemp plant, even within a single strain.

Other external influences such as levels of sunlight, temperature, and the amount of rain and wind a plant endures are also capable of altering a hemp strain. Even in indoor facilities, different types of insects can get in and impact how a strain develops. And this fact is true no matter where the indoor facility is located.

For instance, spider mites are prominent in the northwest. However, facilities in the south are more commonly plagued by aphids. And these factors can all influence the strain that a plant produces.

Another way to think about it is in how people react to certain weather conditions based on their hometown. If people’s families have lived in the south for generations, they may find it easier to cope with the heat in Texas. But those whose lineage goes back to the north might prefer Wisconsin’s icy wind.

The genetics of individual plants also vary even if they are from the same hemp strain. A plant’s phenotype — the characteristics that the plant produces because of the interaction between its genotype and its environment — might be completely different than the phenotype of the plant growing alongside it. This information is true even if the plants are from the same strain and grow in identical conditions. Consequently, it’s crucial that growers achieve the homogenization of the plant when creating a new strain.

How long does it take to produce a hemp strain?

Different factors influence a strain’s effect, so growers have to pay attention to detail throughout the hemp strain’s development. Creating a new hemp strain is an incredibly intricate process. As such, it usually takes three to six generations of breeding for growers to successfully produce a plant with the new traits solidly ingrained.

For example, after cross-pollinating the original plants, growers have to let the offspring grow. Then, they have to identify the strongest set and cross-pollinate them to strengthen the phenotype. Once the next generation of plants springs up, growers must select the offspring that most clearly exhibit the characteristics they wish to produce. This set is ‘generation one’ of the new strain.

The second generation comes from the offspring of generation one. Again, it will consist of the two plants that exhibit the genetic profile that growers want. But growers have to repeat the breeding process once more to obtain the third generation.

If the plants clearly showcase the traits growers desire after three generations, they can identify the strongest single plant and make it their ‘mother.’ And this time, instead of planting its seeds, they can create clones.

Assuming the plant copies well, the clones will create offspring with the chemical composition growers want. If it doesn’t, growers will continue to produce seeds by pollinating the mother plant before they attempt this step again with the next generation.

The cost and time that growers put in to successfully develop a new hemp strain might seem like a sizable barrier to the market. But a number of products are already available, providing an array of unique cannabinoid profiles that yield different results. The variety may be daunting if a consumer is exploring hemp for the first time. However, consumers can break down the variety of available strains quite simply.

What hemp strains are on the market and what can they do?

The various strains available today fit into several categories, and each one centers on the most prominent cannabinoid in each strain. To get an overview of what’s already on the market, here are the most common hemp strains and the cannabinoid profile that makes them up.

The key cannabinoid in each of these hemp strains is cannabichromene (CBC). Studies suggest that CBC is the second most prominent cannabinoid in marijuana (only THC is more abundant). But the demand for plants with a high THC content means consumers find little CBC in most of today’s products.

Unlike THC, CBC does not produce a psychoactive ‘high’ when consumers ingest it. CBC is more comparable to CBD, due to the way it interacts with the body’s cannabinoid receptors and how it preserves the levels of other cannabinoids.

For instance, CBC has been shown to slow the breakdown of anandamide, an endocannabinoid the body produces. People commonly refer to anandamide as the ‘bliss molecule.’

Elsewhere, researchers claim that the cannabinoid encourages neurogenesis. One such example is in a 2013 study, which asserts that CBC improves the function of neural stem progenitor cells (NSPCs). NSPCs are integral to maintaining homeostasis in the brain. They also defend against oxidative stress, toxicity, and inflammation, all of which boost neurological conditions such as Alzheimer’s disease.

Animal studies also suggest CBC can alleviate stress, inviting the exploration of its effectiveness in treating anxiety disorders and depression. Early indicators suggest it combats the symptoms of depression most efficiently when consumers combine it with THC and CBD.

For these hemp strains, cannabigerol (CBG) is the key cannabinoid. It tends to bind with CB2 receptors. And it blocks compounds from binding with CB1 receptors when individuals consume CBG in high doses.

Like CBC, researchers believe CBG possesses anti-inflammatory properties, making it a potential treatment for numerous chronic diseases. A study on mice suggests that CBG reduces the inflammatory markers associated with colitis and inflammatory bowel disease. And researchers have earmarked CBG been for a broad range of other applications as well.

For example, chronic inflammation causes a number of painful conditions. It leads to an array of disorders, including heart disease, high blood pressure, diabetes, and cancer. However, all of these are areas in which CBG might be a possible treatment.

In fact, of all the cannabinoids that researchers have tested, CBG has yielded the best results when combating cancerous tumors. Research, including a 2014 study on its effectiveness in treating colon cancer, showcases CBG’s potential use in preventing and curing cancer.

CBG is also one of several cannabinoids that produce antibacterial effects. When researchers tested CBG against strains of the Staphylococcus aureus bacterium, the cannabinoid showcased antimicrobial properties.

A 2015 study also showed the efficacy of both CBG and tetrahydrocannabivarin (THCV) in reducing acetylcholine-induced bladder contractions. Its list of potential applications is incredibly broad, making it a great addition in hemp strains.

The key cannabinoid in this hemp strain is THCV. Though it lacks the popularity of CBD or THC, it is one of the more widely studied cannabinoids.

In low doses, THCV is an antagonist of those same CB1 cannabinoid receptors, which THC likes to bind to and which CBG sometimes blocks. This information means that, when consumed in low quantities, THCV will not produce a psychoactive sensation.

However, when the dose is increased beyond a certain amount, THCV’s impact on the CB1 receptors is reversed. As a result, smoking a strain rich in THCV should produce a stimulating, clear-headed high. The main problem for people who seek this effect is that it is relatively short-lived; while the impact of THCV is felt faster than that of THC, it lacks the same longevity.

Research has also shown THCV to be useful in aiding weight loss, citing roughly 3mg per kilogram of bodyweight as the optimum dose. For this purpose, strains rich in both THCV and CBD are believed to be more effective than those that are high in THCV and THC.

If there’s someone you know who wants to learn about hemp strains, share this article to ensure they buy the right products for them!

CBG Explained: A 101 Guide to What It Is, How it Works, and Why It’s Beneficial

Where to Buy CBD and Avoid Fake CBD Oil 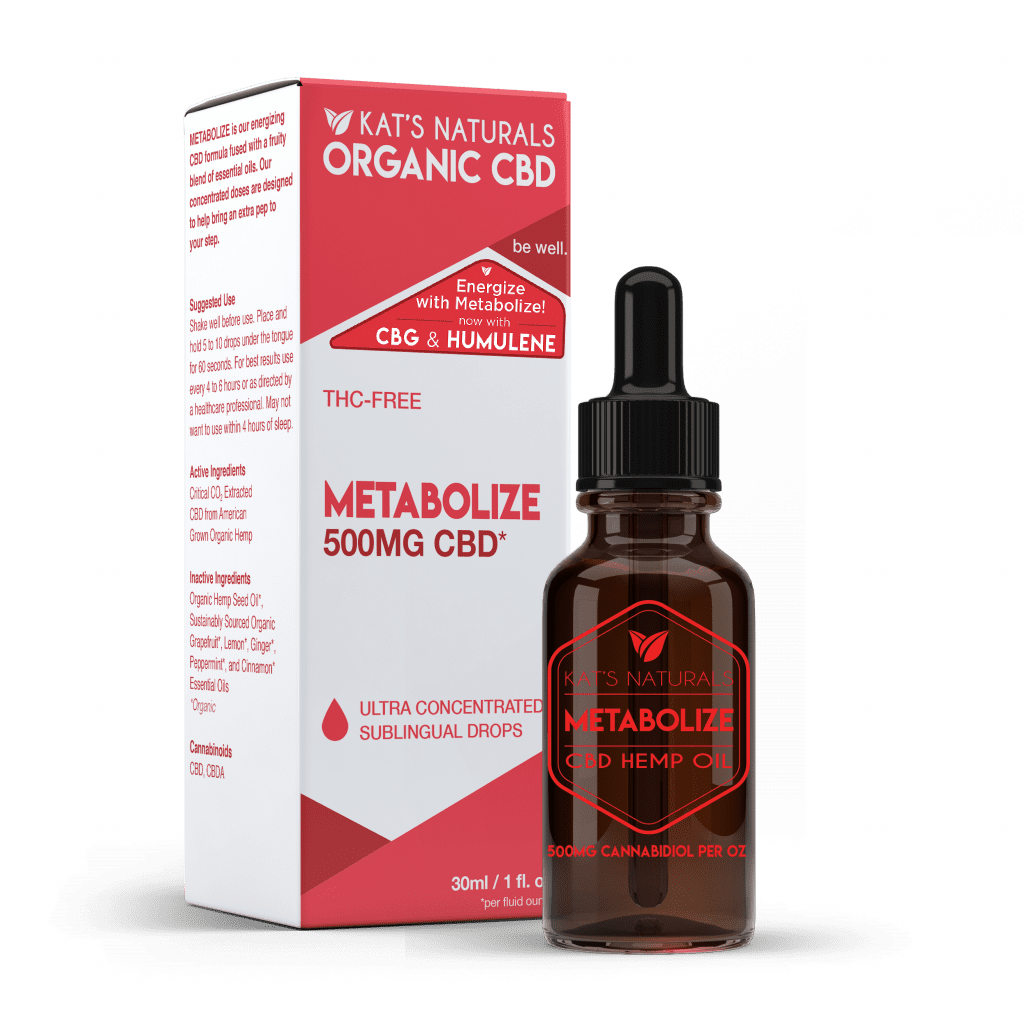 Curious about unique Cannabinoids? Check out the power of CBG with our Metabolize blend!